Troops supporting EUFOR and the exercise started to enter Bosnia and Herzegovina (BiH) from the 20 September. The UK dispatched a Voyager Transport Plane and C130 and on the 25 September, 124 troops arrived in the Royal Air Force A330-200. The following day, the first of three Antonov heavy lift cargo planes delivered the logistics required to support British Army Royal Anglian Regiment B Company. This aircraft type is the second heaviest in the world and was to transport the 24 British vehicles and equipment to support them during the exercise. EUFOR Spokesperson Lt Cdr Carl Harwood gave a joint video interview alongside the Company Commander Major Graham Goodey. This was an opportunity to assure the people of BiH that the arrival of British Troops was to support a large Exercise with EUFOR and announce their arrival. Concurrently KFOR discretely deployed 6 packets of vehicle convoys from Camp Slim Lines in Pristina, Kosovo.

Exercise QUICK RESPONSE 16 was the culmination of two years planning and brought together the Armed Forces of BiH (AFBiH) alongside EUFOR MNBN and the KFOR Tactical Manoeuvre Battalion. The purpose of this exercise was to demonstrate the ability of EUFOR to call forward its Intermediate Reserve troops from across Europe into BiH to support AFBiH authorities if called to do so. This was also an opportunity for the AFBiH to train alongside EUFOR and share tactics and experience. The training was built around a fictional scenario which required the International Force to conduct Peace Support Operations in the host nation. This was to expand on previous Exercises and draw in support from both EUFOR and KFOR Headquarters.

The exercise has expanded over previous years and this year, was to involve a Brigade sized force of over 750 troops working and exercising together providing a Safe and Secure environment of Bosnia and Herzegovina as part of the EUFOR Althea Mission.

An outline of the training accomplished during the exercise:

Prior the tactical deployment, logistic assets had been deployed from 21 September in order to initiate the construction of field camps to support a brigade sized force. Austrian engineers as well as British and Hungarian soldier’s evaluated appropriate areas and set up facilities for soldiers’ needs, e.g. accommodation, ablutions, dining facilities and command posts.

From 29 to 30 of September the tactical move to Manja?a was conducted throughout the night. MNBN and KTM convoys – consisting of 4 companies - featured over 70 vehicles of 7 nations. Driving tactically from Pristina and Sarajevo to Manja?a respectively, in hours of darkness, the reserve forces quickly and discretely reached, secured and occupied their Forward Operating Bases, ready for the next phases of the exercise operations.

Distinguished Visitors Day (DVD) was attended by the head of the EU Delegation in BiH Ambassador Wigemark, Chief of the Joint Staff of AFBiH Lieutenant General Anto Jele?, Commander EUFOR Major General Friedrich Schroetter and distinguished guests. All elements of the following training was exercised by all contributing forces during the exercise training phase 30 September to 4 October and then showcased by a dynamic display:

Under “exercise protection” of KTM, EUFOR had the distinguished visitors convoyed to the visitors’ area while the MNBN had started to establish the outer security cordon, which was tasked to a fictitious company illustrated with green smoke. Guests therefore had the chance to experience military action right on the spot. A highlight for AFBiH forces was securing the key terrain by helicopter.

Due to the layout of the training area, distinguished visitors were able to witness each detail of the operation. A platoon of AFBiH approached the area in their M113 APCs in order to establish a checkpoint to close the outer security cordon. On arrival, two squads were tasked to seize the terrain while the third quickly established the checkpoint. Visitors complimented the performance of AFBiH in synchronizing forces and their tactics, drills and procedures.

Approximately 30 people gathered and started to set up a road block to demonstrate in the vicinity of the checkpoint. Once the Commanding Officer MNBN had assessed the situation he ordered the Austrian Company to prepare for CRC measures. As the demonstration proceeded into the direction of the summit, the Austrian company was tasked to conduct CRC to support forces in the checkpoint from preventing unauthorised access to the summit area. Following firm and decisive action by the unit commander, the rioters withdrew and the unit started to reopen the road in order to re-establish freedom of movement.

Throughout this scenario, the brigade also had to deal with two other simultaneous exercise challenges:

During the demolition of the road block, an improvised explosive device was discovered. The Commander Austrian Company immediately withdrew his troops to a safe distance and requested for Explosive Ordnance Disposal (EOD) support. After assessing the situation, the Brigade Commander tasked KTM professionals to deactivate and remove the unexploded device safely.

A soldier was injured during the CRC so a medical evacuation was called. An Alouette helicopter was tasked to expedite a winch rescue to recover the casualty to hospital.

Evacuation and Extraction of Civilians and VIPs

Austrian platoon conducted an evacuation of diplomatic personnel that had been trapped in the conflict. After securing and confirming the identities of the rescued personnel, the platoon evacuated the diplomats to a secure place, for medical treatment as required.

Summing up his experience of the exercise, Commanding Officer of the Multinational Battalion Lieutenant Colonel Christoph Blasch from the Austrian Armed Forces said, “The training area in Manjaca was excellent, providing plenty of space for the exercise. This allowed the soldiers to train at a company and brigade level with few restrictions. The training itself was a good experience, and provided a good opportunity to work alongside the AFBiH. I was impressed with their efforts; they were well prepared for the Peace Support Operations scenario. At times the exercise required patience from everyone involved, but the Multinational Battalion displayed a high grade of professionalism and motivation throughout.”

After the dynamic display Ambassador Lars-Gunnar Wigemark gave a press statement and said: “This exercise shows how EUFOR continues to play a critical role in BiH. I am particularly pleased to see the excellent co-operation and co-ordination between EUFOR and Armed Forces BiH and I welcome participation of professional soldiers from a wide range of EU Nations working together for a secure and stable Bosnia and Herzegovina.”

This was followed by Lt Gen Anto Jele?, Chief of Joint Staff of the Armed Forces BiH, who stated: “The relationship between EUFOR and Armed Forces BiH is important for overlapping of different synergies.”

COMEUFOR Major General Schrötter concluded by saying: “While this exercise is primarily designed to practice our contingency plans, the participation of units from Armed Forces BiH serves to showcase their forces’ significant progression in Capability Development and Capacity Building and their growing potential for increased participation in international peace support operations.” He added: “Large scale Brigade-Level exercises such as Exercise Quick Response 2016 prove decisively that EUFOR Forces along with our comrades from AF BiH and our Reserves are at all times ready and able to respond quickly and effectively to any potential threat to our Safe and Secure Environment.”

EUFOR Operation Althea is currently made up of soldiers from 15 EU member states and 5 partner nations. Its primary roles are to provide capacity building and training support to the Armed Forces of BiH and to support BiH efforts to maintain a safe and secure environment, whilst providing support to the overall EU comprehensive strategy for BiH. 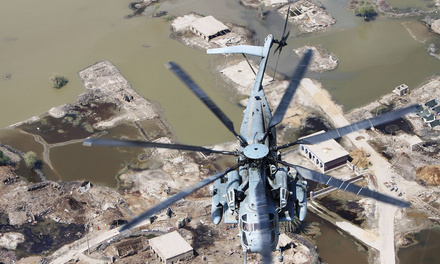 Almost every day, we hear or read about attacks, acts of sabotage, or natural disasters from all around the world. Are